Just now completed IPv6 certification with Hurricane Electric. It was very much fun! 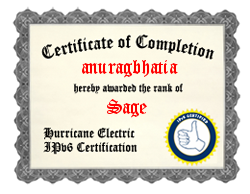 Starting was pretty much simple and basic, followed by email server running on v6 - which also I was doing already. I was stuck at most unexpected part - when I had to setup IPv6 based DNS servers. My first reaction was - that’s so simple….later on realized that system was just not accepting my entry and kept on giving error with AAAA records. Then suddenly I realized that I missed creating AAAA at DNS servers, but created only glue records which was causing issue. Created AAAA and that also went smoothly + glue helped me in final test too.